The plug-in allows audio engineers to mix, monitor and render Ambisonics recordings with the AMBEO VR Mic or B-format Ambisonics tracks up to 3rd order with head-tracked binaural audio. Thus, engineers can immediately assess what an Ambisonics track will sound like on a 360° video platform or in a game engine and can fine-tune the audio as needed.

The plug-in includes the Sennheiser AMBEO A-to-B converter and AMBEO Ambisonics-to-binaural conversion technology. For monitoring and mixing, it is able to render both Ambisonics A-format and B-format to binaural for headphones. When connected to dearVR SPATIAL CONNECT, engineers can mix and listen with headtracking in VR. 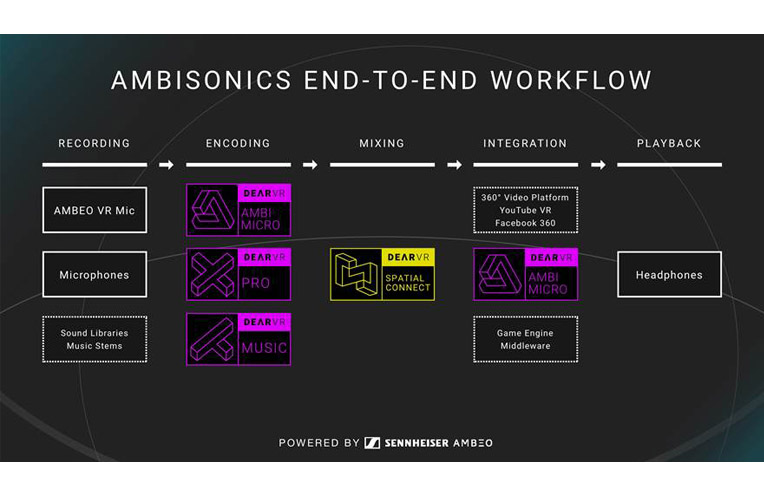 For further processing, the various input formats need to be converted to Ambisonics B-format and rendered binaurally for headphone monitoring. For these purposes, the new dearVR AMBI MICRO includes the AMBEO A-to-B and AMBEO Ambisonics-to-binaural conversion libraries. Mono sources can be encoded to Ambisonics with dearVR PRO/MUSIC.

dearVR SPATIAL CONNECT enables the user to mix virtual sound sources in VR and to control their position and levels in the dearVR PRO plug-in when in Ambisonics output mode.

By adding dearVR AMBI MICRO to the Ambisonics master bus in the DAW, the user can binaurally monitor the Ambisonics mix with headtracking using a VR headset. This makes for an easy assessment of the Ambisonics track on 360° video platforms or in game engines.

Use any pair of Sennheiser or Neumann headphones to monitor the binaural soundfield. We highly recommend the studio-quality Sennheiser HD 600, HD 650, HD 660, HD 800 S and HD 300 PRO, or the Neumann NDH 20.

3D audio production techniques will also be featured in the [email protected] program by Sennheiser’s 3D audio engineer, Gio Jacuzzi. His presentation, “Dynamic and Static Binaural Recording, Mixing and Reproduction for Immersive Audio”, will cover the entire toolchain for recording, mixing, and playback of binaural content, and can be seen at the Hilton, Level 4, C7 on Friday, January 25 from 4:00 p.m. to 6:00 p.m.

Participants will learn about the underlying technologies and various practices for creating static binaural and dynamic binaural (Ambisonics) content, as well as how to use the Neumann KU 100 dummy head, the AMBEO Smart Headset, and the AMBEO VR Mic.